England and South Africa get the 2019 edition of the ICC Cricket World Cup underway at Kennington Oval on Thursday and England start as short price favourites.

England come into the tournament as favourites, trading at around 2/1 to be crowned champions for the first time. They proved their well being with a 4-0 series win at home to Pakistan earlier this month whilst a tour to West Indies earlier this year saw them held to a 2-2 draw. Their two warm up matches produced mixed results, a 12 run defeat to Australia at Southampton followed by a 9 wicket demolition of Afghanistan at The Oval.

England had a nightmare in the 2015 CWC in Australia / New Zealand, winning just 2 of their 6 pool matches and suffering an early exit. They have been runners up three times but the most recent of their appearances in the final came back in 1992.

The Proteas are also looking for a first ever World Cup title. The last time the CWC was staged in England came back in 1999 and South Africa lost out in a thrilling semi final to Australia. The game finished in a tie but Australia progressed to the final as they had finished higher in the pool stage than South Africa on net run rate. South Africa also lost in the semi finals in 2015, going down in another dramatic match against New Zealand. This year South Africa can currently be backed at 10/1 to be crowned World Champions, a bigger price than they have been in the more recent editions of the CWC.

As far as recent form is concerned South Africa completed a 5-0 clean sweep of Sri Lanka in a home series in March this year and they were 3-2 winners at home to Pakistan in January. The Proteas also won in Australia (2-1) towards the end of 2018.

In England / Wales 25 matches have produced 15 wins for England, 8 wins for South Africa and 2 no results.

The most recent series between the sides came in England in May 2017 and England won it 2-1. In South Africa in February 2016 the Proteas fought back from 2-0 down to claim a 3-2 series win. 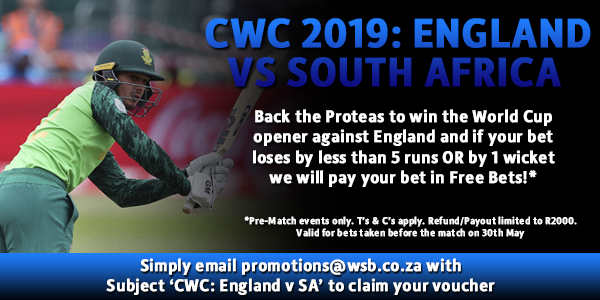 Note prices quoted are correct at the time of publication but are subject to change.

The Proteas bowlers need to get amongst the wickets early as England bat deep and score quickly. If the South African pace attack can capture those England openers without too much damage early doors then its game on but we look outside of the match result for a bet.

We lead with the top South African batsmen and Faf du Plessis gets the vote to top score for the Proteas.

Additional interest comes in the top England bowler market. Jofra Archer has been hyped up after a terrific showing in the IPL saw him drafted into the squad but the more experienced Chris Woakes has a knack of taking key wickets and he gets the nod.

Note prices quoted are correct at the time of publication but are subject to change.