The second test match between India and South Africa gets underway in Pune on Thursday and after a heavy defeat in the opening contest the Proteas are 1-0 down with two to play.

The first test was staged in Visakhapatnam last week and India came out on top by 203 runs.

India won the toss and opted to bat and they never regretted the decision with opening par Mayank Agarwal (215) and Rohit Sharma (176) putting on 317 for the first stick. India declared on 502/7 and Keshav Maharah (3/189) was top SA wicket taker.

The Proteas replied with 431 with Dean Elgar top scoring with 160, Quinton de Kock made 111 and Faf du Plessis 55 whilst Ravi Ashwin took 7 of the 10 wickets to fall.

India declared their 2nd innings on 323/4 with Rohit Sharma making another 127 and the Proteas were bowled out for 191 in their second knock with Shami taking 5 wickets and Jadeja 4.

This was how the teams lined up at Visakhapatnam in the first test.

If the Proteas want to make changes then Lungi Ngidi, Heinrich Klaasen, Zubayr Hamza and Anrich Nortje were the squad members who sat out the first test.

After this the teams head to Ranchi for the third and final test. 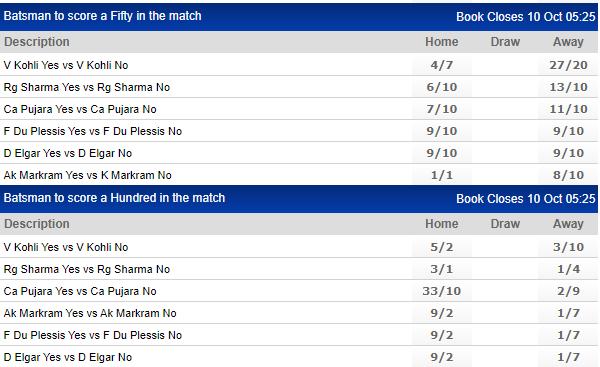 Note, odds quoted are available at the time of writing but are subject to change

The Proteas battled really well to stay in the game in their first innings but India just had too much and it will need quite a turnaround to prevent the hosts from winning the series with a game to spare.

For a betting interest I'll go with Faf du Plessis to score a 50 in the match and when it comes to a likely centurion Rohit Sharma's form is hard to get away from.