The FA Cup Final takes place at Wembley on Saturday when Arsenal take on Chelsea and we pick out for a few speculative bets at big prices.

Arsenal booked their place in the final with a surprise 2-0 win over last season's winners Manchester City. A goal in each half from Aubameyang capped what was arguably their best display of the season and it keeps Arsenal in the hunt for silverware and European football next season.

The Gunners cup run started with a 1-0 win over Leeds. They were drawn away for the next 3 rounds and overcame some potentially awkward hurdles to win at Bournemouth (2-1), Portsmouth (2-0) and Sheffield United (2-1).

Chelsea also beat Manchester opposition in the semi finals. They knocked United out with a 3-1 win with their goals coming from Giroud and Mount plus an own goal.

Chelsea's road to the final started with against Championship sides and they won 2-0 at home to Nottingham Forest and 2-1 at Hull. They went on to complete a 2-0 home win over Liverpool who had other priorities at the time and in the quarter finals they won 1-0 at Leicester.

Chelsea secured a spot in the Champions League season, finishing fourth in the Premier League with 66 points.

In the 2 league meetings this season Chelsea came from a goal down to win 2-1 at The Emirates in December and the return at Stamford Bridge in January finished all square at 2-2.

This is a repeat of the 2017 final which Arsenal won 2-1 whilst a season later Chelsea lifted the trophy with a 1-0 win over Manchester United. 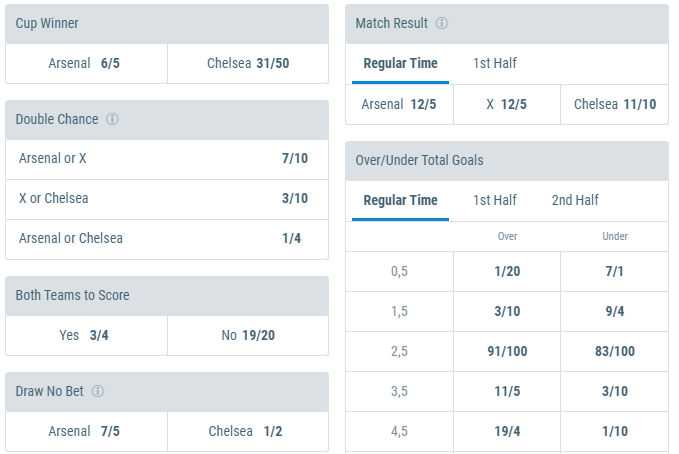 Note, odds quoted are correct at the time of last update but are subject to change

Chelsea start as favourites but I wouldn't be rushing to back them given the way Arsenal put it together in the semi finals. I'm battling to form a firm opinion and

hence will pick out a few recreational punts as a bit of end of season interest.

Note, odds quoted are correct at the time of last update but are subject to change

Barcelona host Napoli in the second leg of their Uefa Champions League Round of 16 clash on Saturday, the scores are level at 1-1 and Barca are favourites to finish the job.