The third round of the Carabao Cup sees all the English Premier League big guns enter the competition and we take a look at the betting for all five of Tuesday night's ties including Luton v Manchester United.

Let's begin with a look at Tuesday's Carabao Cup coupon. Remember the team news for this competition can have a dramatic impact on the odds so watch the media and remember prices are subject to change. 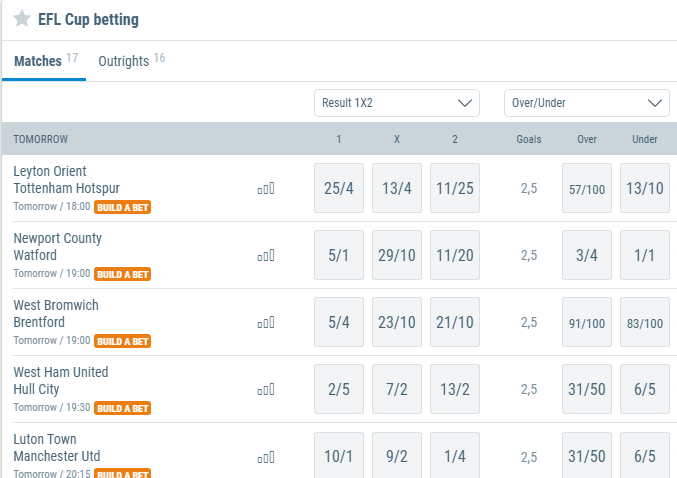 Given Spurs are involved in Europa League football they were not required to participate in the earlier rounds. This will no doubt be the lowest of priorities for the club who face a hectic schedule. Gareth Bale's arrival over the weekend was followed by a 5-1 win away to Southampton for Spurs first points of the Premier League season. They also won a Europa League tie in Bulgaria last week which followed a 1-0 home defeat to Everton in their opening league match. Last season Spurs were humbled by lower league opposition in this competition, losing on spot kicks to Colchester.

Leyton Orient came through the first 2 rounds with wins away to Forest green (2-1) and at home to Plymouth (3-2). They have also taken 4 points from their first two league games so at their level they are clearly in good shape.

Newport of League 2 have made home advantage count in both their ties so far, most notably beating Swansea 2-0 in a local derby and in the previous round they edged out Cambridge 1-0 and they have form in terms of upsetting visiting sides from higher divisions in cup football. All of which means Watford, who are adjusting to life in the Championship and needed penalty kicks to see off League 1 side Oxford in the previous round, will need to be on their game.

Premier League sides West Brom (home to Brentford) and West Ham (home to Hull) have options when it comes to how they go about this competition. Both of the top flight sides are still looking for a first point of the EPL season and the team news will tell us whether their respective coaches see the Caraboa Cup as a potential confidence builder or unwanted distraction to what looks like a tough season ahead.

The most attractive game sees Championship side Luton take aim at Manchester United. Luton narrowly avoided relegation last season but they have made a cracking start to the new league campaign with 2 wins from 2. In the Caraboa Cup Luton began with a 3-1 home victory over Norwich and then won 1-0 at Reading.

Last season United went all the way to the semi finals of this competition where they lost 3-2 on aggregate over the 2 legs of their clash with Manchester City. With Champions League football to contend with this season this will be the lowest of the priorities but the club could use a boost having lost their only league match so far at home to Crystal Palace (3-1) on Saturday.

Unless you have reliable advanced team news to hand it might pay to wait until line ups are announced before having a punt but I do have an early fancy in the game at Luton.

The home side are flying in the early stages of this season and should be well up for this. Whilst I am not calling a surprise, I give them a better than even money shout of contributing to the scoring in regulation time.

Note, all odds quoted are subject to change.

Kaizer Chiefs and Orlando Pirates both have DSTV Premiership home fixtures on Tuesday night when the Amakhosi host Baroka and the Bucs take on TS Galaxy.