Let's begin with a look at Wednesday's Carabao Cup coupon. Remember the team news for this competition can have a dramatic impact on the odds so watch the media and remember prices are subject to change. 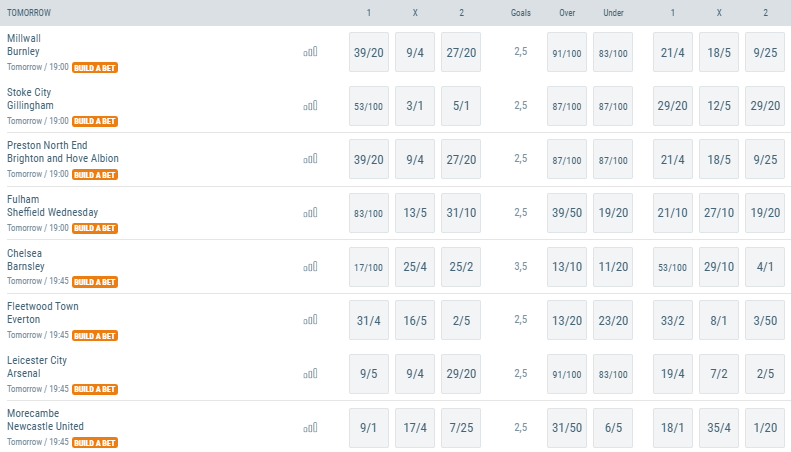 A number of Premier League teams have been drawn away from home and whilst surprise results still look hard to call in the absence of advanced team sheets Burnley, who travel to Millwall could be one of the more vulnerable sides. Millwall earned their third round place on the back of 3-1 wins over Crawley and Cheltenham and they have 4 points from 2 Championship outings so far. This represents a step up given Burnley knocked Sheffield United out on penalty kicks in the previous round but last season they lost at home to League 1 side Sunderland in this competition and they were short of numbers in defence for last week's 4-2 Premier League defeat at Leicester.

The likes of Chelsea (home to Barnsley) and Everton (away to Fleetwood) are bound to ring the changes but I imagine the sheer the depth of their squads should still see them through. Brighton visit a useful Preston side in one of the more tricky games to call whilst Fulham, who already look set for a relegation battle, offer very little betting value for a home game against Sheffield Wednesday.

Newcastle go to Morecambe who lost a league game 5-0 at home to Cambridge at the weekend and whilst the Geordies will also chop and change I can see them fielding a strong enough side to be in the goals here.

Leicester v Arsenal is a game that will attract more attention than the rest of the coupon. Leicester were beaten semi finalists in this competition last season but this time around they have a Europa League campaign adding to the fixture schedule. Arsenal are a formidable force in the FA Cup but usually field the youngsters in the League Cup. The team news will tell us plenty and I wouldn't want to nail up a bet until I see the sheets.

Millwall might be worth a small bet to win in 90 minutes whilst Newcastle to score at least 3 goals looks a stronger proposition.

Note, all odds quoted are subject to change.