The English Football League 2019/20 season gets underway on 3rd August and for those punters who like to take a long term interest we suggest a bet to win the League 1 title.

There are 24 teams in this division with two automatic promotion places available and another from the play offs. Going back to the 2018/19 season Luton won the title with 94 points and Barnsley also gained promotion with 91 points. Charlton finished third with 88 points and they were also promoted after winning the play offs with Portsmouth (also 88 points), Sunderland (85 points) and Doncaster (73 points) rounded out the top six. 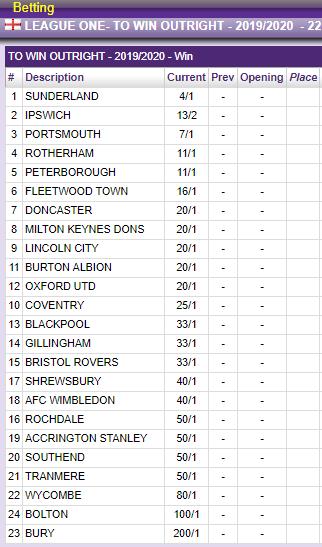 Sunderland top the betting boards after fluffing their lines last season where their campaign faltered towards the end. Despite drawing too many matches they had looked on course for automatic promotion until running out of steam and although they went on to contest the play off final they came up short. Likewise Portsmouth would have been disappointed to miss out after setting the pace for much of last season whilst Doncaster, who scraped into the play offs ahead of Peterborough, will again have aspirations of a promotion tilt.

Ipswich were relegated from the Championship last season as were Rotherham and both are prominent in the betting to bounce back. Rotherham are no strangers to this level but Ipswich will have to prove they can adapt and the fallout from relegation brings a number of off field headaches, not least balancing the books.

Two sides who were promoted from League 2 last season MK Dons and Lincoln City and mid table finishers from the previous campaign such as Burton, Oxford and Blackpool are looking for the improvement necessary to launch a promotion bid.

Coventry could be hampered by a ground sharing arrangement with Birmingham City for their home fixtures and in Joey Barton Fleetwood have a coach who can start and lose a fight in an empty room.

So Who Gets the Vote to Win the Title?

In a word .... Sunderland and at this stage I ought to state to those who don’t know me, I’m a lifelong fan of this club.

On the face of it butchering a promotion challenge last season could be seen as a disaster but in Sunderland’s case it may yet prove to be a blessing,......... as long as they make amends this time around.

After years of mismanagement off the field the new owners, who I strongly suspect are on a short rather than long term mission, have made giant strides in recovering the clubs financial situation which had become precarious at best. They have been successful in re-connecting the club with its long suffering support base as demonstrated by a record League 1 attendance of over 46,000 for a Boxing Day 2018 home fixture.

The finances are now in much better shape although the rules revolving around income / expenditure has seen the removal of high earners who were on Premier League wages continue and by all accounts that will still be an issue for the next year or so. My gut feel is that the ownership are looking to deliver the club back to the Championship debt free, making a sleeping giant attractive to investors before cashing in on a chunk or all their shareholding before taking a back seat or departing with a significant wedge.

It’s a balancing act for sure and the club have retained the services of Aiden McGeady and fended off interest in goalkeeper Jon McLaughlin who will be key men this time around. The question is where will the improvement come to secure automatic promotion.?

Striker Will Grigg failed to deliver the goals that would have clinched promotion after joining in the January transfer window. Sunderland became “1 goal per game specialists” but Grigg has had time to settle and should be more of a force this time around.

Some promising youngsters are coming through who should be given their opportunity this season and the club appears to be targeting the better players from League 1 rivals with a couple of deals looking promising once another big earner is off the wage bill.

Jack Ross continues as manager which for me is the right call. A likeable, level headed coach, although perhaps a touch too negative tactically at times, Ross will have learned a lot from his first season in English football. No doubt he is under pressure to deliver but if things don’t go to plan in say the first third of the season I would expect him to be replaced whilst there is still time to turn things around. There are a section of supporters who believe he is not the right man, the sort of fans who believe Sunderland should be playing and beating Barcelona in the Champions League every season. However those of us who have experienced the delights of hitch hiking to Portsmouth to see Lawrie McMenemy’s side go down 3-0 and leave the field without even acknowledging the travelling support in the 1986/87 relegation season are a touch more realistic.

I see this as a season that will have a huge bearing on the clubs short to medium term future and having experienced League 1 level last season, the bulk of the current squad looks up to the task.

Backing a team you support can be dangerous and tying funds up for 9 months needs careful consideration but I reckon 4/1 is a fair price. For those who like to take a multiple outright bet at the start of the season, this warrants inclusion for one leg in my opinion.

Look out for more outright football previews for the 2019/20 season.