The English Premier League is heading for a short break but not before a number of big games take place on Sunday 4th October including Manchester United v Spurs.

Let's begin with a look at Sunday's EPL coupon. Remember prices are subject to change. 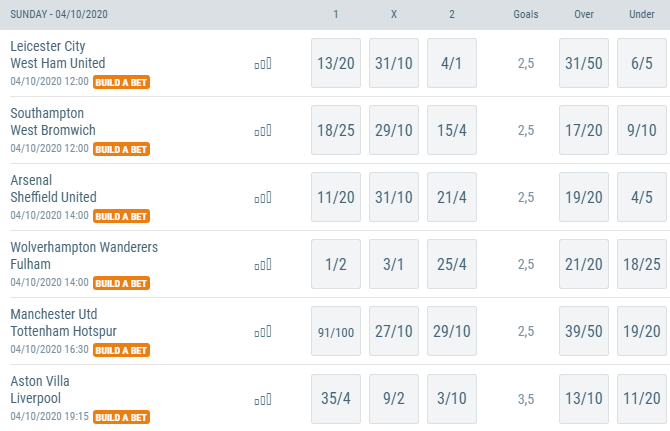 Leicester are 3 wins from 3. They began with a 3-0 win at West Brom and a 4-2 home win over Burnley and last weekend they came away from Manchester City with a 5-2 victory. Jamie Vardy has already bagged 5 goals, 4 of which came from the penalty spot. After a poor show in a 2-0 home defeat to Newcastle first time out West Ham are improving. They were competitive in a 2-1 defeat at Arsenal and last weekend they opened their account with a 4-0 home win over Wolves.

Southampton started with a 1-0 defeat away to Palace and then lost 5-2 at home to Spurs. Last weekend they got off the mark with a 1-0 win at Burnley and Danny Ings has scored all 3 of his sides goals so far. West Brom were 3-0 up against Chelsea last week but had to settle for a 3-3 draw. They started with a 3-0 home defeat to Leicester and suffered a 5-2 at Everton where they played a chunk of the game with 10 men.

Arsenal (home to Sheffield United) and Wolves (home to Fulham) are both short prices. The visitors in both those games have lost all 3 of their matches so far and the Gunners would look the stronger proposition to me and they should be in the goals.

Neither side will be particularly happy with their start to the league campaign. United have played just the 2 matches, losing 3-1 at home to Palace and then riding their luck to eventually edge out Brighton 3-2 away from home. Spurs only away fixture so far delivered a 5-2 win at Southampton with 4 goals for Son but either they side of that they lost 1-0 to Everton and drew 1-1 with Newcastle

Villa have won both their matches so far without conceding but things are about to get far tougher after a 1-0 home win over 10 man Sheffield United and a 3-0 victory at a Fulham side who have looked all at sea. Liverpool have won all 3 games, most recently beating top 4 candidates Chelsea (2-0 away from home) and Arsenal (3-1 at Anfield). Liverpool were made to work hard to win this fixture 2-1 last season but although Villa look stronger this time around I find it hard to make a case for a surprise.

Leicester to win and over 2.5 total match goals at 5/4