Manhester City v Spurs is the pick of Saturday's English Premier League matches whilst games involving Liverpool, Arsenal and Aston Villa also feature in our betting round up.

Let's begin with a look at Saturday's match results and under / over 2.5 goals coupon from Sportingbet. 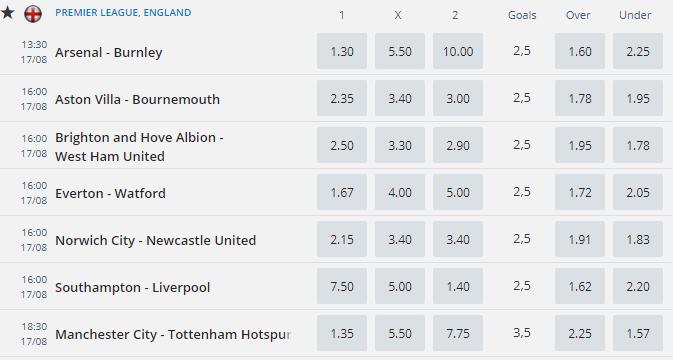 Saturday's early kick off sees Arsenal host Burnley and both these sides made winning starts last weekend. The Gunners came away from their visit to Newcastle with a 1-0 win thanks to Aubameyang 's second half strike whilst Ashley Barnes was on target twice as Burnley came through with a 3-0 home win over Southampton.Last season Arsenal won both meetings with Burnley by a 3-1 scoreline and they have won 9 and drawn 1 of the last 10 Premier League head to heads against this opposition. That record looks hard to get away from although I fancy Burnley can be competitive and Arsenal to edge it by a single goal margin is my pick.

In the afternoon kick offs Aston Villa's first home game back in the top flight comes against a Bournemouth side who will have been disappointed with last week's 1-1 draw at home to another newly promoted side Sheffield United. Villa threatened a surprise at Spurs last week, taking an early lead only to concede 3 goals in the last 17 minutes but this is a more realistic opportunity to open their account. I was burned by Bournemouth last week and will go with Villa here although it's something of a speculative call.

Brighton's home game against West Ham and Newcastle's visit to Norwich look like tough games to call whilst big spending Everton, who had to settle for a point away at Palace last week, host Watford who crashed to a 3-0 home defeat to Brighton first time out.

That bring's us on to Liverpool who made short work of Norwich with a 4-1 win at Anfield last week. A trip to Southampton should hold no fears although involvement in the Uefa Super Cup in midweek doesn't help. Liverpool have beaten Southampton by margins of at least 2 goals in each of the last 4 meetings and I can see Klopp's side winning a game of 3 goals or more in total.

We finish with the headline clash between Manchester City and Spurs. City won both league meetings by a 1-0 scoreline last season but Spurs came through a thrilling Uefa Champions League semi final on away goals (4-4 aggregate) which included an epic 7 goal thriller in Manchester.City coasted to a 5-0 win away to West Ham in their opening game whilst Spurs struck late to get the better of Villa (3-1). City won 18 and lost 1 of their 19 home games on their way to the title last season with Palace the only side to deny them a foot perfect record in front of their own supporters.In the current title race betting Sportingbet make City a 9/20 chance with Liverpool trading at 26/10 and Spurs are third favourites at 18/1. Sportingbet are also betting “without City” and Spurs are a 5/1 shot.

I'll go with a match result bet and given there was only 1 goal in it in 4 meetings between the teams last season the draw could be worth a speculative play even though City rarely finish all square.

The second leg of the Carabao Cup semi final between Aston Villa and Leicester City takes place on Tuesday night, the tie is looked up at 1-1 and this time Villa have home advantage.