Let's begin with a look at Tuesday's coupon, note, odds are subject to change. 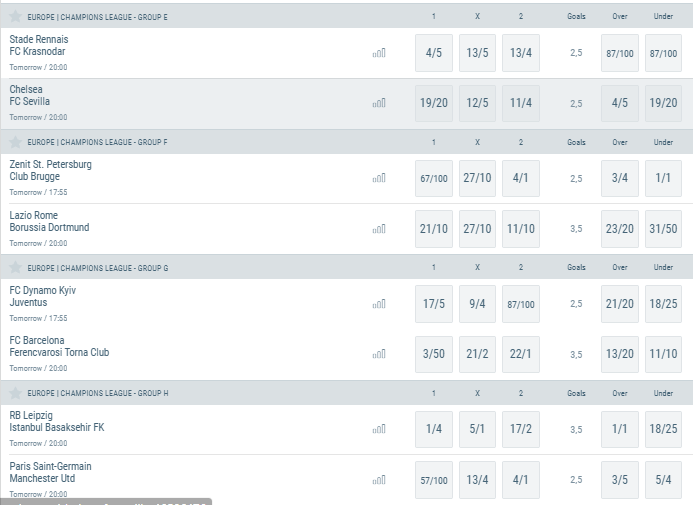 Chelsea (evens), Sevilla (29/20), Rennes (5/1) and Krasnodar (18/1) are the teams that make up this quartet and the odds to top this group are included in brackets. The headline game on Tuesday sees Chelsea host Sevilla.

Chelsea have been banging the goals in, scoring at least 3 times in 4 of their 5 EPL matches. However they have been conceding as well and they have earned just 8 points from the 15 available. The goals they scored in the 3-3 draw at home to Southampton on Saturday were from the top draw but not for the first time this season defensive mistakes proved costly.

Sevilla started their La Liga campaign with back to back wins before drawing 1-1 at Barcelona but last weekend they were beaten 1-0 at Granada. The Europa League specialists have struggled to mark a mark in this competition but their record against English clubs warrants respect.

Chelsea's expensive new recruits have had a few games under their belts and this is the sort of stage where they can shine. Whilst Premier League results have been below expectations the home side get the vote to edge this one.

Lazio have been below par in the new Serie A season with 1 win, 1 draw and 2 defeats against their name. In home games they crashed 4-1 to Atalanta and drew 1-1 with Inter and at the weekend they were beaten 3-0 at Sampdoria.

Dortmund have won 3 and lost 1 of their Bundesliga outings, keeping clean sheets in the last 2. They rarely fluff their lines when it comes to negotiating their way through the group stage and on paper this looks like the toughest test they will face.

You really don't want to be playing catch up from losing on Matchday 1 and whilst Dortmund appear to be in much better shape than Lazio a draw might not be viewed as a bad result for both sides.

Barca's game against Ferencvaros is the most one sided of betting heats and hence makes little appeal to me. Juventus will probably be a popular choice with punters but they were held to a draw away to Serie A minnows Crotone at the weekend and Kyiv won all 3 of the qualifiers to reach the group stage with a degree of comfort. Matchday 1 in this group is swerved.

United's trip to PSG is the focus and 2 season's ago a youthful Manchester side overturned a 2-0 first leg deficit with a 3-1 second leg win in Paris in the knockout rounds.

PSG lost their first 2 Ligue 1 matches but have since reeled off 5 straight wins. 4 with clean sheets. United's early season EPL form is erratic including home defeats to Palace and Spurs where they conceded a total of 9 goals. Away from home they have won at Brighton (3-2) and most recently Newcastle (4-1) and if they can keep things reasonably tight defensively I expect them to be competitive.

Marcus Rashford came through as anytime goalscorer pick for me at the weekend and I quite like his price to register a goals, anytime, in this game.

Note, odds are subject to change.