Uefa Champions League football continues on Tuesday with the action coming from Groups A to D and we take a look at the betting for selected matches including Manchester City's visit to Marseille.

Let's begin with a look at Tuesday's coupon, note, odds are subject to change. 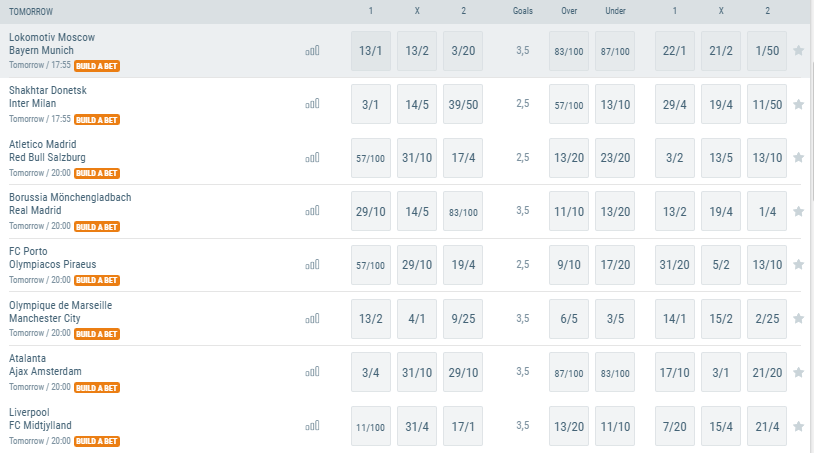 Matchday 1 saw Bayern Munich thrash Atletico Madrid 4-0 whilst Salzburg and Lokomotiv Moscow played out a 2-2 draw. Champions Bayern put on an awesome show in Munich last week, scoring twice in each half to make short work of Atletico. Salzburg came from behind to lead Lokomotiv 2-1 in their home fixture but eventually had to settle for a point.

Bayern were in the goals again at the weekend with a 5-0 home win over Frankfurt and another victory here will likely see them open up significant daylight at the top of the group. They look very difficult to oppose here but finding a bet at anything approaching appealing odds has proven difficult to me. A nibble at Bayern to win by a 2 goal margin is something of a token gesture.

There were plenty of goals in Matchday 1 in this group and the results were something of a surprise. Real Madrid were beaten 3-2 at home by Shakhtar, conceding 3 times in the first half and a second half fightback came up short. Inter were odds on favourites for their home game against Monchengladbach. Lukaku opened the scoring early in the second half but the Bundesliga side scored twice before a late equalizer, again from Lukaku, saw the game end all square at 2-2.

Shakhtar will be full of themselves after that result and they now take aim at Inter whilst Real travel to Gladbach under some pressure. I'll take the view the trend of high scoring games will continue in this quartet with an over 2.5 total goals double.

Manchester City have yet to really hit their straps this season but they did make a winning start in this group, quickly recovering from conceding an early goal at home to Porto to run out 3-1 winners. In the other Matchday 1 fixture Olympiacos edged out Marseille with a last minute strike from Koka.

My focus is on City's trip to Marseille and although the EPL side underperformed again at the weekend in a 1-1 draw at West Ham I fancy they will be in the goals here, hopefully registering in each half.

Matchday 1 was a good day for the away sides in this group. Liverpool won 1-0 at Ajax thanks to a first half own goal whilst last season's surprise package Atalanta thumped Midtjylland 4-0, a game they put to bed with 3 first half goals.

Liverpool's home game against Midtjylland is the most one sided of betting heats so we look at Atalanta v Ajax for a betting interest,. Can you believe Ajax won a league game 13-0 at the weekend? However they visit a really dangerous opponent here. It's a game Ajax can't afford to lose after the defeat to Liverpool and a chance is taken that they can come away with a draw which looks attractively priced at more than 3/1.