Let's begin with a look at Wednesday's coupon, note, odds are subject to change. 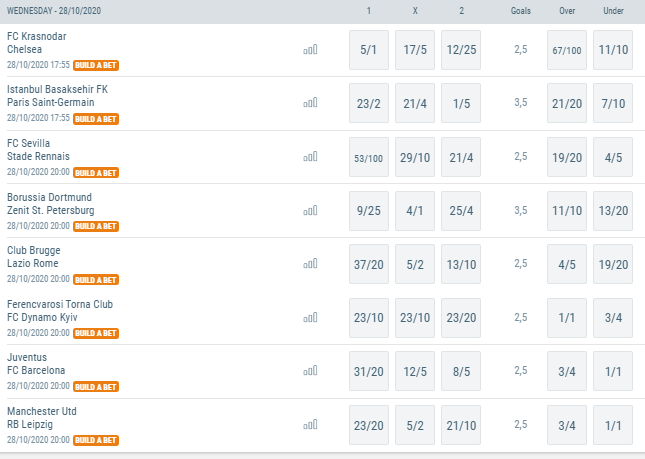 It's pretty much as you were in Group E with both Matchday 1 games finishing all square. Sevilla will arguably be the happiest as they drew 0-0 away to Chelsea whilst Rennes played out a 1-1 draw in their home fixture against Krasnodar.

Chelsea head to Krasnodar who were very much the outsiders in the betting to top this quartet. The draw with Sevilla wasn't the worst of starts given they were up against a very useful side and at the weekend Chelsea were involved in another goalless draw, this time in a league game at Manchester United. With home advantage Krasnodar shouldn't be taken lightly but Chelsea were full of goals earlier in the season and I just feel they will have to much quality for their opponents here.

Matchday 1 saw Lazio complete a 3-1 home win over Dortmund whilst Club Brugge came away from Zenit with a 2-1 victory.

Dortmund were favourites to win in Rome so they are now playing catch up but given Zenit's poor show last time out they ought to put themselves on the board with a degree of comfort. They were 3-0 winners at home to Schalke in their derby match at the weekend and I can see them bagging 3 more goals here.

The game between Brugge and Lazio looks a tougher call. Both teams to score (yes) looks on to me though the odds of around 7/10 are a little shorter than where I tend to play.

In Group G we focus on the game between Juventus and Barcelona. Both teams made a winning start with Juve coming out on top 2-0 away to Dynamo Kyiv and Barca thrashed Ferencvaros 5-1 at Camp Nou.

Since then Barca lost a La Liga El Clasico 3-1 at home to Real Madrid and in Serie A Juve were held to a 1-1 draw at home to Verona, their third successive league game to finish all square.

There are question marks against both these sides this season but they made winning starts in this group and I doubt either coach would be disappointed if this were to finish all square.

Matchday 1 in Group H saw Manchester United come away from a trip to Paris with an excellent 2-1 win over PSG with the goals coming courtesy of a Fernandes penalty and a late Rashord strike. We now focus on their home fixture against RB Leipzig who started their campaign with a 2-0 home win over Basaksahir.

After a poor start United seem to have got their act together and further evidence the defensive issues of their early matches have been sorted came at the weekend when they drew 0-0 at home to Chelsea.

RB Leipzig are setting the early pace in the Bundesliga with 4 wins and 1 draw and they are 1 point better off than Bayern. Remember this Leipzig side reached the semi finals of this competition last season, knocking out Spurs and Atletico Madrid along the way.

I fancy this will be very watchable and over 2.5 goals gets my vote.