Sri Lanka’s tour of South Africa starts with a test series comprising of two matches and the Proteas are overwhelming favourites for the first contest which gets underway at Kingsmead, Durban on Wednesday.

In the outright markets South Africa are as short as 1 / 9 to win the series and 2/7 to win it 2-0. Meanwhile for the first test the match result market also has a one sided look to it.

Note: Prices are an average of what was available at the time of writing but are subject to change

Let’s take a look at the squads.

The Proteas come into the series on the back of a 3-0 clean sweep of Pakistan over Christmas and New Year. The winning margins in that series were 6 wickets, 9 wickets and finally 107 runs. Prior to that they were a big disappointment in Sri Lanka in July last year, losing both test matches by margins of 278 runs and then 199 runs.

Sri Lanka were in Australia recently where they lost both test matches by wide margins, an innings and 40 runs in the first match and 366 runs in the second. They also lost a 2 match series 1-0 in New Zealand recently, pulling off a spirited draw in the first match before taking a 423 run beating in the second. Late last year Sri Lanka were on the wrong end of a 3-0 clean sweep in a home series against England

The Proteas have a horrible record in test matches staged at Kingsmead. Over the course of the last 10 years they have won 1, drawn 1 and lost 6 of 8 tests with the sole victory coming against India in 2013.

The most recent test match at this venue came in 018 and South Africa lost to Australia by 118 runs. Australia put together scores of 351 and 227 and the Proteas posted totals of 162 and 298. Maharaj took a total of 9 wickets in the match.

On Sri Lanka’s tour of South Africa in 2011 the visitors sprang a surprise on this ground with a 208 run victory. 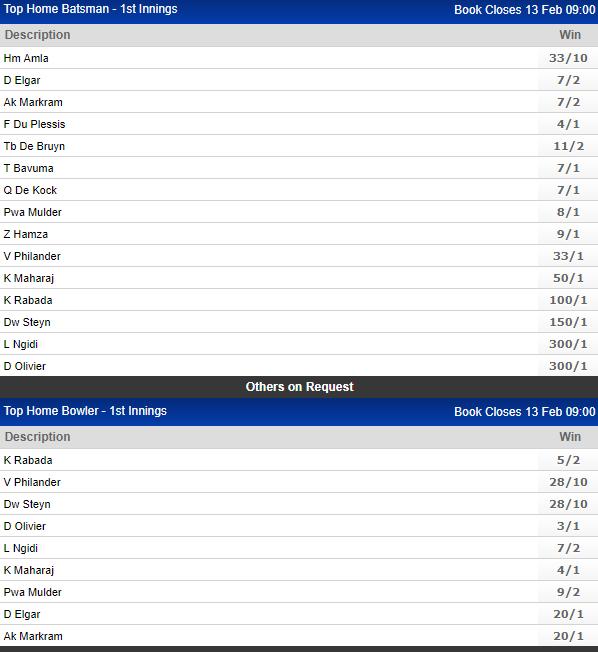 Note: Prices are an average of what was available at the time of writing but are subject to change

Sri Lanka’s test match form has disintegrated since they hosted the Proteas last year and it’s hard to make a case for a surprise. I’ll look to the top SA bat market taking Amla to top score for the Proteas in the first innings.