There are some big games taking place in the English Premier League on Wednesday night including Manchester United v Spurs, the Merseyside derby between Liverpool and Everton and we also take a look at Chelsea v Aston Villa

Let's begin with a look at Wednesday's EPL match result and over / under total goals coupon from Sportingbet. 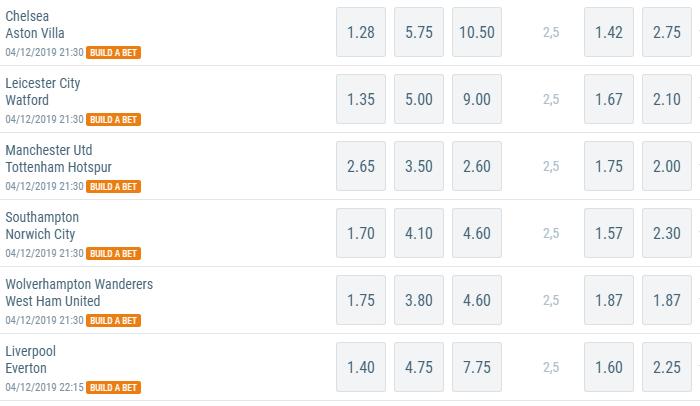 Chelsea were on the wrong end of a shock result at the weekend. A 1-0 defeat at home to West Ham, who had been struggling, means they have now lost 2 league games in a row. Chelsea had reeled off 6 league wins in a row before a 2-1 loss at Man City in Round 13 and they remain at Stamford Bridge where their league record comprises of 3 wins, 2 draws and 2 defeats. After the weekend results Chelsea remain fourth in the standings but now all of 14 points behind Liverpool.

Last week was a good one for Villa with Monday night's 2-0 home win over Newcastle followed by a 2-2 draw away to Manchester United. On their travels a 5-1 victory at Norwich is the only other highlight with 5 other road trips having ended in defeat.

Chelsea's form at Stamford Bridge is not as convincing as when they travel and Villa arrive in good shape. It's still a tall order for the visitors but I can see them contributing to the scoring.

United's 2-2 draw at home to Villa kept them in mid table and with 8 points worth of ground to make up if they are to challenge for a top 4 finish. At home United have won 3, drawn 3 and the 1 defeat came against Crystal Palace. Their last 3 league games have all gone over 3.5 goals and of course this game has an extra edge with Jose Mourinho returning to Old Trafford.

Spurs have won all 3 matches under Jose Mourinho and the goals have been flowing, most recently Saturday's 3-2 win at home to Bournemouth. Mourinho's first game in charge saw Spurs beat West Ham 3-2 away from home and they followed up with a 4-2 home win over Olympiacos in the Champions League. Spurs finished the previous round of matches in fifth place, 6 points behind Chelsea and 2 better off than United.

Spurs won this fixture 3-0 last season although United won the return in London 1-0.

United could have a couple of key players returning from injury and I would rather see the line ups before making a match result call. It will be interesting to see how Mourinho plays this one but my gut feel is the high scoring trend in recent Spurs games will continue with both sides on target.

Bet: Both Teams To Score + Over 2.5 total goals at even money

Liverpool maintained their 8 point lead over Leicester at the top of the standings with a 2-1 home win against Brighton at the weekend, a result which might have been more comfortable had they not had their keeper red carded. Liverpool's record now comprises of 13 wins and 1 draw, they have been foot perfect at Anfield where every visiting side has found the net once, albeit in defeat.

Everton went down 2-1 at Leicester on Sunday. I was a cruel outcome with the decisive goal coming at the death after Everton had threatened a surprise when Richarlison opened the scoring. They finished the round just 2 points clear of third bottom Southampton who host Norwich on Wednesday and defeat here could see Everton fall into the bottom 3. A 2-1 win at Southampton in another recent road trip is their only victory on the road so far. A visit to Palace delivered a 0-0 draw and 5 other away days have ended in defeat. At the time of writing the future of coach Marco Silva was the subject of much speculation.

Liverpool won this fisture 1-0 last season and the return at Goodison finished without a goal.

By my reckoning 8 of Liverpool win's this season have been by a single goal margin and another trend is for the away side to score just the 1 goal at Anfield. I'll go with the latter option.